The Eurovision Song Contest is a staple of my year. I start looking forward to it in about November, after listening to the songs from previous years so much I start to get tired of them. But the excitement for the coming year fills me with a sense of nostalgia, so I can enjoy them all over again. So… like millions of other people around the world, it was safe to say I was looking forward to Eurovision 2020 in Rotterdam. Then, on the 18th of March 2020, the unthinkable happened. It was announced that, because of the Covid-19 pandemic, the Eurovision Song Contest 2020 was to be cancelled.

I don’t think anybody could argue that it wasn’t the right decision. As things have progressed, it would have been absolutely unthinkable to see an arena like Rotterdam Ahoy packed with 16,000 people, even if it hadn’t been temporarily turned into an emergency overflow hospital. But just because it was the right call, that doesn’t mean it wasn’t sad.

Then, the rumours started. Eurovision was cancelled, but the EBU might be planning something for the date anyway. It had been announced that the songs selected for 2020 would not be eligible to compete in 2021, even though it was expected that the 2021 contest would still be held in Rotterdam. These rumours turned out to true, and took the form of ‘Europe! Shine A Light’, a special celebration of the songs selected for the 2020 contest, in which the public would be able to pay tribute to the songs, but in which they would not compete. It would be filmed and broadcast from Hilversum in the Netherlands, where the Netherlands first hosted the contest in 1958 after their first win, and hosted by Chantal Janzen, Edsilia Rombley and Jan Smit, who had originally been chosen to host the contest in Rotterdam.

I don’t think I’d be the only one to suggest that the show itself was pretty weird. It was melancholy but inspiring at the same time, and parts of it were genuinely uplifting. I would defy anyone not to have filled up watching the artists join together to perform Katrina & the Waves’ ‘Love Shine a Light’ at the end of the show, finished off by the woman herself. The lighting of monuments all over Europe was very touching, and I’ll admit seeing Gali Atari singing the classic ‘Hallelujah’ got me going too. Even Graham Norton filled up when being interviewed on a particularly laggy video link with Chantal Janzen in the studio, before rushing back to his commentator’s microphone with the words ‘god, that was awkward’. It was strange not to see all of the songs in their entirety, though. They played thirty second clips of each song followed by a short message from each of the artists – some of which were downright bizarre. But we knew going into this that it wasn’t Eurovision, and we would have to manage our expectations.

Nevertheless, I wanted to carry on the tradition of writing my annual Eurovision summary. But as with the show itself, it’s going to be a little different. Because there wasn’t a show on which to base my opinion, I’m picking five of my favourites from the album – but I’m not going to rank them. So without further ado, this is my Eurovision 2020 Top 5, in no particular order: 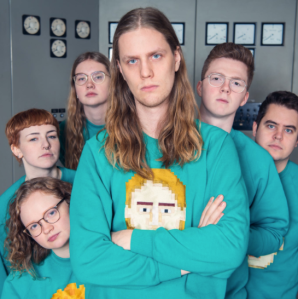 Iceland (Ísland) – 🇮🇸 – Daði & Gagnamagnið, ‘Think About Things’ — This was something of a runaway winner from the start. Daði Freyr had competed in Söngvakeppni Sjónvarpsins (the Icelandic national selection competition) before, but ‘Think About Things’ was a clear winner almost from the start. In the final, it scored almost double the amount of votes that the second place song received. It was hotly tipped to do well at Eurovision, but sadly that wasn’t to be – I think it will still take its rightful place as a Eurovision classic, even though it never got to compete. It’s equal parts awkward and weird, but somehow effortlessly cool. I defy anyone to watch it and not immediately want Daði Freyr to be their best friend.

Ireland (Éire) – 🇮🇪 – Lesley Roy, ‘Story of my Life’ — I actually hadn’t heard this song until the first ‘semifinal’ (the YouTube broadcasts on the Tuesday and Thursday before the Shine A Light show on Saturday), and I fell in love with it instantly. It’s classic feel-good pop, and I’d like to think it would have done well in the competition… but as we all know by now, my support is something of a kiss of death at Eurovision so maybe it would have somehow taken the UK’s rightful place at the bottom of the table. It’s definitely going on my playlist, no matter what. There are rumours circulating right now that Ireland won’t compete in 2021, but if this is the quality of entry we can expect from them, I truly hope these rumours turn out to be false.

Russia (Россия) – 🇷🇺 – Little Big, ‘Uno’— It’s hard to know where to begin with this one. It was hard to be on the internet without being aware of Little Big’s first viral hit, ‘Skibidi‘… but this is totally different. It’s charming in a bizarre way, especially because Russia has a tendency to take themselves very seriously in this competition. To see them sending this bunch of goons without a facial expression to share between them was quite an interesting choice, but it worked! I honestly think this could have won, and even though in my heart of hearts I was rooting for Iceland, I wouldn’t have been mad if they had. Though someone might want to explain how numbers work to them, if they’re brave enough. Uno, dos, cuatro…

Australia – 🇦🇺 – Montaigne, ‘Don’t Break Me’ — Honestly, Australia have been strong since they first came to the competition. I absolutely loved Kate Miller Heidke last year and I was glad to see they’d gone for the same brand of weird staging with honest-to-goodness pop. I’m not really sure the clown aesthetic would have translated onto the Eurovision stage, but if you close your eyes and listen to this song, it really holds up. I’ll definitely be checking out some of her other work, maybe clowns are just her thing? It’s hard to tell nowadays. I do think this would have been on the left side of the table in a real Eurovision competition, though… so well done Australia for smashing it yet again. I’m excited to see what they bring next year.

Ukraine (Україна) – 🇺🇦 – Go_A, ‘Соловей’ — So, this one might be a bit more of a niche choice. But you guys know me, I’m a sucker for anything in an artist’s native language… since Tulia represented Poland in 2017, I discovered I have quite an affinity for the ‘white voice’ singing technique. Go_A didn’t disappoint, it’s definitely a unique sound and it takes a little getting used to, but I love people using the Eurovision stage to showcase their culture and to bring something special that no other nation can offer. Ukraine’s history in the competition is somewhat… varied (from Verka to Jamala), but this was a fine continuation of their Eurovision tradition, if you ask me.

So that’s my top five… do you agree? Do you think I’m insane? Answers on a postcard, or perhaps you could leave a comment here. You can also reach out on both Twitter and Instagram (where you can find me under the name @sprakskatan). I’d love to hear what you guys thought of the show, and what your favourite songs were. I’ll be back next month on the first with a regular post, so… thanks for reading, as always, and I’ll see you guys then. Stay safe, and to quote Daði Freyr, ‘stay healthy, stay fabulous, you guys are beautiful.’